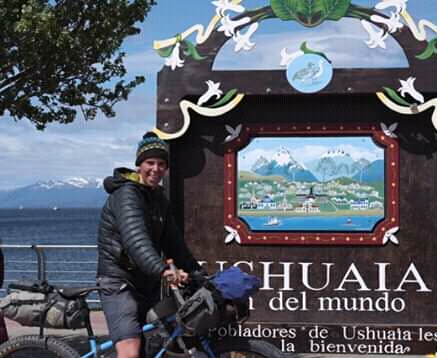 From Anchorage, Alaska to Ushuaia, Argentina

Yesterday I arrived in Ushuaia aka the end of the world after cycling more than 30.000km this past year and a half. By the time I arrived I already forgot so much about the beginning. But I didn’t forget what it felt like to ride those first kilometers in Alaska. The howling wind in my ears when I turned right on the Denali Highway. It was spring, the Denali highway, a 250km dirtroad through the Alaskan wilderness was still closed for traffic. For a number of days I was alone doing what I like most, cycling and camping in the wild. Well, I was not really alone, it was me and some very hungry bears I presume. I cycled a lot those first couple of weeks. I was nervous about what lay ahead and I wanted to prove myself that I could do it. Just before crossing into Canada I met Victor. He was the first of many cyclists I cycled with. Victor, Su, Rick, Manu, Ed, Christina, Sandra, Claire, Marge, Juan, Jacinta, Frank, Iris, Bruno, Roberto, Anna-Tina, Sebastian and Julie. It was a real pleasure to share some of the road with them.

Along the way I got to know so many kind strangers who gave me food, shelter and encouragement. A big thank you to all of them. Now more than anything I’m looking forward to being a kind stranger to others.

Several times during this journey I have been mistaken for a boy. I have been called a courageous young man on several occasions. It happens in Belgium as well, but not that often. People assume I must be a boy because I’m travelling alone. It does not fit expectations to be a woman travelling alone.

People told me I have big balls cycling alone through all these presumed dangerous countries. Further south they called it big cojones even further south they said you must have big huevos (eggs). While this also means big balls, it is ironic because women are carrying the huevos. But this is how we describe courage, it is a masculin attribute.

To me gender has very little to do with it. If anything having big balls seems to be a disadvantage when you are spending so much time on a saddle. And although I encountered many examples of the big bearded adventurer archetype, I also met many travellers who did not fit that image. I met some amazing solo cycling women. Not a lot, but more than you would think. All undoubtedly in the possession of very big huevos.

It is a privilege to see the world from my saddle. For some people I met even travelling within their own country is a distant dream. I crossed paths with people looking for a better life some place else. I met people for whom the road was their last resort. Cycling across continents becomes bittersweet once you realise your voluntary choice is someone else’s last resort. The biggest privilege of them all was to get to take a glimpse into other people’s lives. For a moment, to imagine what it must be like to live there.

Through every single country I rode from north to south drinking and driving seemed to be a common practice. It was then that I felt most vulnerable.

More often than not the roads were littered with rubbish. At times it felt like I was cycling through a plastic sea. There is no end to the stuff we consume and throw away. It does not have to be like that. I can carry all the stuff I needed these past 18 months in 3 small bags on my bicycle.

I cycled through 16 countries: through deserts, along rivers, lakes and oceans. I cycled in big forests and even bigger cities and I climbed more mountain passes than I care to count. I rode through pouring rain, hail, snow and thunderstorms, the heat and smog of big cities and countless sunrises and sunsets.

I slept in bus stops, toilets, restaurants, a cellar full of potatoes, schools, churches, a jail in Mexico and truck stops with armed guards in El Salvador. Most of all I enjoyed the nights where I could choose wherever I wanted to pitch my tent. To ride untill I’m tired, to then pull of the road to sleep under the stars, and then to do it all over again the next day is the most freedom I have ever experienced.

It is spring again, this time at the other side of the world. Riding with a tailwind ito another spring makes it very difficult to hit the breakes and stop cycling. But the reality is that I have to end this trip to make space for something new and that might not be the end of the world after all.

If you enjoyed the ride please consider donating to the MS-Liga. This organisation aims to guide persons with MS (Multiple sclerosis) through all facets of the desease. It is a cause I feel very strong about and although it is not my place to tell you about what it is like to live with MS, imagining and hearing about the mountains they have to climb everyday, the headwind they constantly have to cycle into, gave me some extra motivation when things got hard. All donations will go entirly to the MS-Liga. Follow this link to donate.

4 thoughts on “The end of the world”